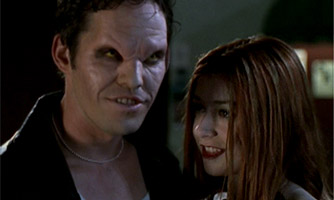 The We Hate Cordelia Club goes all fangy.
Giles: I have to believe in a better world.
Buffy: Go ahead. I have to live in this one.
Advertisement:

Cordelia recovers from her life-threatening injury and tries to resume her old life as Alpha Bitch, but being "Xander Harris's cast-off" has her devalued social standing to an all-time low. Cordelia however, managed to make friends with a new girl and fellow fashionista, Anya, who gives Cordelia a pendant for luck. Deciding that all her trouble started when Buffy came to town, Cordelia tells Anya that she wishes that Buffy had never come to Sunnydale...and Anya reveals herself as a demon and grants it.

Cordelia is initially very happy with this new reality where she is again on top, only to discover that something is very wrong—there's now a curfew, everybody wears drab colors and acts very nervous, going to the Bronze is, for whatever reason, not an option, and teenagers aren't allowed to drive. After sundown, Cordelia discovers that Xander and Willow are still lovers ("I can't win!!")—and vampires.

Thanks to Buffy never arriving in Sunnydale, the Master has gained dominion over the town, ruling from the Bronze after creating a civilization where humans live in constant terror and are freely toyed with and murdered by the vampire populace. The Master also makes enigmatic allusions to a Plant that will soon open.

Giles runs a ragtag band of human rebels and rescues Cordelia from Xander and Willow and takes her back to the library, but Willow and Xander infiltrate the building and kill her before his eyes. Giles notices Cordelia's pendant and holds onto it.

After some cursory research, Giles discovers that the pendant belongs to Anyanka, a vengeance demon and a patron saint of sorts for scorned women. On his way home to do more detailed research, he is saved from a group of vampires by the newly-arrived Buffy Summers.

Buffy infiltrates the Bronze and finds Angel, who has been kept captive to be freely tortured by Willow; he offers to lead Buffy to the Plant, which turns out to be a factory with the purpose of draining humans completely dry of blood. Buffy and Angel ambush the vampires; the resulting battle ends with Angel, Xander, Willow and Buffy all dead.

Meanwhile, Giles summons Anyanka in an attempt to reverse the wish, but she is less than happy about being invoked by a man. He manages to subdue her and smash the pendant, restoring the original universe to the moment in time when Cordelia made her wish. A bewildered Anya attempts to grant Cordelia's wishes, but no longer has any power.