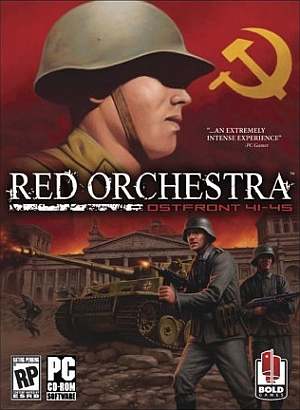 Red Orchestra: Ostfront 41-45 is yet another First-Person Shooter that is based around World War II. However, there are two key differences: it focuses entirely on the Eastern Front with conflicts between the Germans and Soviets (a setting usually forgotten by WWII FPS, probably because of the usual America Won World War II portrayal); its focus is entirely on realism. There are no crosshairs, no health kits, and bullets follow the standard laws of physics (mostly).

It started out as a mod of Unreal Tournament 2003. As an infantryman, you have the choice of playing several different classes: an assault trooper with a sub-machine gun; a sniper with a scoped rifle (the rifle shakes like crazy unless you're bracing it against something, and you have to account for bullet-drop when firing a long distance); a machine gunner (depending on the type, the barrel can overheat and you will have to manually replace it with another barrel); a bolt-action rifleman (the only class which has unlimited slots); a semi-automatic rifleman; and the squad leader, who is basically just an assault trooper with smoke grenades. On maps where there are tanks, you also have the option of playing as a tank crewman, a tank commander (the only classes that can drive tanks), or an anti-tank trooper who starts out with a gun that can destroy tanks with one or two shots to less armored areas. Tanks are also handled realistically in that you either need at least two people to drive them (one to drive, one to fire and reload the gun), or one person who switches very fast between the two positions (which is an Acceptable Break from Reality, since waiting 30 seconds to switch from the driver's seat to the turret does not make for exciting gameplay).

Maps consist of either pure infantry battles, pure tank battles where everyone has to play a tank crewman/commander, and combined arms battles which use both infantry and tanks. Strategy revolves around capture points, where one side has to capture a certain amount of area in a given time and the defenders have to stop them. Each side is also assigned a number of 'reinforcements,' which indicate how many times a player can respawn after death. Once they reach zero, no one can respawn anymore. If any side is at 0% reinforcements and has all of their members killed, then they lose regardless of any other factor.

The game itself, as a mod, was released in the Editor's Choice Edition of Unreal Tournament 2004, (alongside Alien Swarm, itself another Ascended Fanfic) and sprang from an entry in a mod contest held by Epic Games, with first prize being a million dollars and free Unreal Engine 2 licenses. They won, and founded Tripwire Interactive on the spot. There are two mods for Red Orchestra called Darkest Hour, which focuses on the Western Front after D-day, and Mare Nostrum, which focuses on the battle in the Mediterranean and features Italian troops.

The sequel, Red Orchestra 2: Heroes of Stalingrad, was released in September 2011. Focusing on the infamously brutal Battle of Stalingrad and the surrounding area instead of spanning the entire Eastern Front, the sequel adds a first-person cover system and a leveling system that gives players weapon upgrades as they become more experienced.

The sequel's stand-alone expansion Rising Storm was released in May 2013, set in the Pacific and featuring much more asymmetrical gameplay between the American Allies and Japanese Axis factions - the former having generally more direct firepower in their weapons (such as the basic rifleman being able to equip themselves with a semi-automatic rifle as opposed to the bolt-action rifles every other faction's riflemen uses, and a flamethrower class) while the latter utilizes special grenade uses for Suicide Attacks or Booby Traps, a player-held mortar class (while all other factions have to mark locations for the team's commander to call in fire missions on the location) and Banzai charges.

The next title in the series, Rising Storm 2: Vietnam is set in The Vietnam War, departing the World War II setting of the past games. It pits the American military, with later updates including the ARVN and Australian Army, against the North Vietnamese Army and National Liberation Front (Viet Cong). Expanding on the asymmetrical gameplay of the first Rising Storm, the Americans have access to several types of airstrikes, including napalm, along with helicopters of both attack and transport types, while the North Vietnam forces have several types of Booby Traps such as punji sticks and tripwire traps. Their squad leaders also have the ability to dig tunnels in open ground, allowing reinforcements to pour into areas away from the front lines.

The Red Orchestra series took its name from the Soviet Union's espionage network during the war, which was called the Red Orchestra by the Gestapo. This game otherwise has no connection to spying.

In the Soviet campaign, the player's main objective to hold Stalingrad for as long as possible, at any cost. This would deprive the German Sixth Army's combat capability until Soviet reinforcements can launch a counteroffensive and crush the invaders.

In the Soviet campaign, the player's main objective to hold Stalingrad for as long as possible, at any cost. This would deprive the German Sixth Army's combat capability until Soviet reinforcements can launch a counteroffensive and crush the invaders.