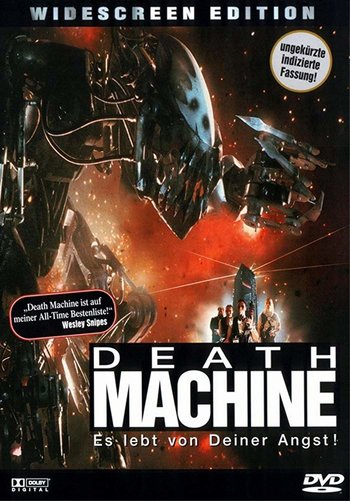 A 1994 low budget Sci-Fi Horror film by the director of Blade and The League of Extraordinary Gentlemen, Stephen Norrington, who also worked on special effects for Aliens and Split Second (1992).

The film concerns a near-future Mega-Corp known as CHAANK Industries, which deals primarily with weapons. At the center of the story is a conflict between the new Chief executive Hayden Cale (played by Ely Pouget) and the resident genius mad scientist Jack Dante (Brad Dourif), with a group of pacifist humanitarian eco-warriors and other executives thrown into the mix. Then there is the titular death machine which closely resembles what a terminator based on Alien queen anatomy would look like. There are also child experiments, brain-wiped combat vets and combat exoskeletons all for good measure. Finally, the story itself plays out in the office of the corporation - a 50-something story skyscraper, providing a fittingly claustrophobic backdrop.

In a nutshell, what you would get if you take Die Hard, add some RoboCop and Terminator, throw in a dash of Alien, and mix it with some Sam Raimi-style humor on a low budget but with an eye for style.

Not to be confused with the 1976 martial arts flick Death Machines.