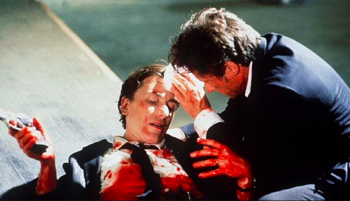 Charley didn't say anything but knew it was true. Stomach wounds were fatal. The surgeons could do nothing. The ambulance drivers would go through the wounded when and if they got to the field and jerk shirts up checking for stomach wounds. Those soldiers would be left. The surgeons were too busy with amputations and treatable injuries to spend time on those with stomach wounds. It was an agonizingly slow death it might take two days and the pain left men screaming until they were too hoarse to make another sound.
— Soldier's Heart
Advertisement:

Gunshot wounds in fictionland are a strange matter. Often, a shot to the head or chest is almost always immediately fatal. Shot in the shoulder or leg? Usually Just a Flesh Wound. Likewise, being Shot in the Ass is typically both non-lethal and Played for Laughs.

Then there's this trope.

A character who is shot or otherwise wounded in the stomach is in for a slow and agonizing death, especially if medical assistance is not available. More often than not, this is Truth in Television, especially in a pre-modern setting. The danger here comes from damage to internal organs with all the nastiness that comes with it. Rupture of the large intestine, for example, sends toxins into your bloodstream which can poison the rest of your system leading to organ failure and death. Unfortunately for the victim, this can mean hours or days of agonizing pain.

When inflicted intentionally, such wounds are typically only employed by villains to inflict a Cruel and Unusual Death or For the Evulz. Sometimes, an Anti-Hero of the Unscrupulous or Nominal variety may threaten to inflict one as a negotiating tactic or to ensure the villain suffers a suitable death. When the wound is accidental, this trope can be used to show that War Is Hell or that being wounded can be a Fate Worse than Death. Quite often, the victim of such a wound will beg to be put out of their misery rather than be left to die.

This trope tends to exist on the mundane extreme of the Sliding Scale of Realistic vs. Fantastic. When the trope is not played straight, a Torso with a View or Invisible Holes may result. As such, this trope is frequently seen in Westerns, War Movies, and other serious works wherein the Time-Delayed Death can be Played for Drama.

While this trope is similar to Gutted Like a Fish, that trope usually implies extreme bodily harm (i.e. internal organs spilling out) sufficient to cause immediate death. Being wounded in the stomach is the opposite of Instant Death Bullet, Off with His Head!, Half the Man He Used to Be, and Impaled with Extreme Prejudice, all of which result in a quick (although not necessarily painless) death.

As this is a Death Trope, unmarked spoilers aplenty are ahead. Beware.