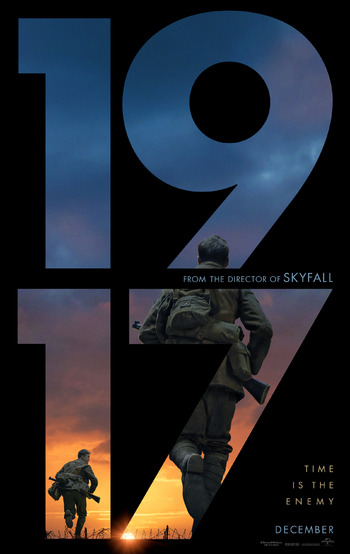 "There is only one way this war ends. Last man standing."
"Down to Gehenna, or up to the Throne, He travels the fastest who travels alone."
— Rudyard Kipling (quoted by Gen. Erinmore)
Advertisement:

The story takes place from April 6-7, 1917, in the midst of World War I. With the Germans in apparent retreat, the Devonshire Regiment is scheduled to launch a full on attack on their front line. However, aerial reconnaissance has revealed that the Germans are planning to lure the Devons into a massacre.

With the field telephones to the Devons' sector cut, the only way to get word to stop the attack is to send two runners: Lance Corporal Blake (Dean-Charles Chapman) and Lance Corporal Schofield (George MacKay). Blake has been chosen to deliver the message because he'll have extra motivation: his brother is an officer with the regiment. Having received their orders, the two soldiers go on a hazardous, harrowing trek through no man's land, hoping to reach the Devonshires and stop the attack before it's too late.

Notably, the story is told in Real Time and shot and edited to look as if it were done in one takenote actually two a la Birdman or Rope.