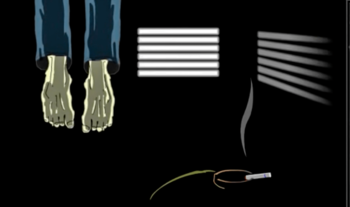 "The Hovitos are near." (tastes the poison dart, spits) "The poison is still fresh, three days. They're following us."
— Satipo, Raiders of the Lost Ark
Advertisement:

A Fresh Clue is a piece of evidence that reveals someone was at this location recently. This can range from just moments before to a few days ago. Once the evidence is found by someone, they can then deduce that whoever left it there must be nearby.

Warmth in any form is a big giveaway, and so is smoke - from a cigarette, a stamped-out campfire, or a gun.

Compare Signature Item Clue, which is about who was here instead of when they were here, although the two can overlap. Also compare Follow the Chaos. In Real Life, this is sometimes called "tracking and trailing".