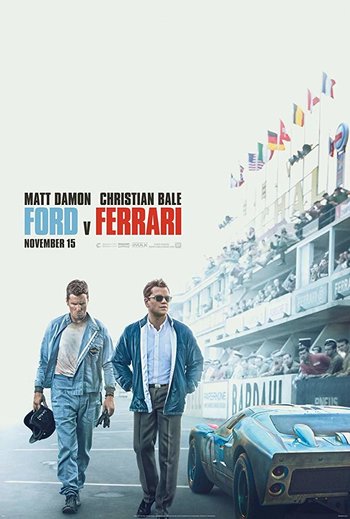 Go like hell.
Ken: So the great Carroll Shelby is going to build a car to beat Ferrari, with Ford.
Carroll: Correct.
Ken: And how long did you tell them that you needed? Two, three hundred years?
Carroll: Ninety days.
Advertisement:

Ford v Ferrari is a 2019 film directed by James Mangold and distributed by 20th Century Fox, centered on the 1966 24 Hours of Le Mans. It stars Matt Damon as Carroll Shelby, and Christian Bale as Ken Miles.

Sales are slumping for the Ford Motor Company. The first baby boomers are growing up and they don't want Ford's 50s-style cars. They want something cool and sleek, like a race car. Vice President Lee Iacocca (Jon Bernthal) proposes that Ford go into racing, specifically the 24 Hours of Le Mans endurance race, to boost their credibility and public image. Ferrari has won four of of the last five Le Mans races, and Enzo Ferrari (Remo Girone) is nearly broke; why not buy him out? However, Ferrari rejects their offer in favor of a deal with Fiat, and insults their president. Furious, Henry Ford II (Tracy Letts) wants to strike back. He doesn't want to just beat Ferrari at Le Mans; he wants to bury them. And for that, he needs a car.

Enter Carroll Shelby. Shelby won Le Mans several years ago before a heart condition forced him to stop racing, and now he builds high-end sports cars. Ford approaches him with a blank check to build a car to beat Ferrari, and Shelby knows just the man to drive it: Ken Miles, an expert driver and close friend whose temper puts him at odds with Ford's higher-ups, particularly Leo Beebe (Josh Lucas). As the car takes shape, Shelby's and Miles' scuffles with Ford's management may prove just as tough a battle as Le Mans itself.

It premiered at the Telluride Film Festival on August 30, 2019, and was released into theaters on November 15, 2019. The film subsequently received four Academy Award nominations, including Best Picture, and won for Best Film Editing and Best Sound Editing.

Ford II: Give me one reason why I don't fire everyone, starting with you?
Carroll: Well, sir, we're lighter, we're faster. And if that doesn't work, we're nastier.