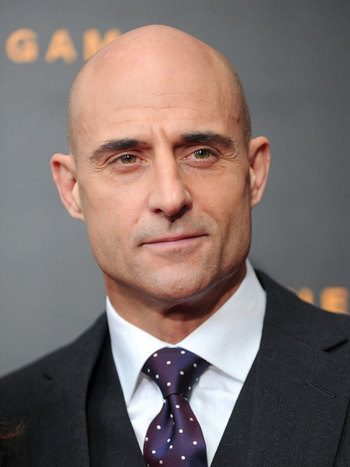 "If you think about Shakespeare, you remember Richard III and Macbeth before you remember Ferdinand, whose role is just to fall in love and be a bit of a wimp. I love the baddies. More important, though, is making the baddies somehow, weirdly, understood."
Advertisement:

Mark Strong (born Marco Giuseppe Salussolia on 5 August 1963 in Islington, London) is a British actor of Italian and Austrian descent.

He is especially known for his villainous performances — such as Prince Septimus in Stardust or Lord Blackwood in Guy Ritchie's Sherlock Holmes — though he's been impeccably playing the Knight in Shining Armor, a morally gray hitman, and pretty much everything in between as well.

If Guy Ritchie or Matthew Vaughn is working on a new project, it's safe to say that they will at least consider their friend for a part in it.