Film / Welcome to the Punch 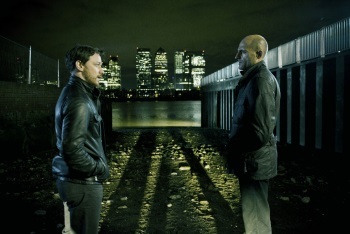 Detective Max Lewinsky (McAvoy) chases master thief Jacob Sternwood (Strong) avoiding his superior's orders and ends up defeated by Sternwood. However, Sternwood leaves him alive with a shot in the leg. Three years later, Jacob’s son, Ruan, is arrested at the airport forcing him to get out of his retirement in Iceland. As soon as Jacob returns to London, detective Lewinsky traces him back but some dirty circumstances within their environments turn them into unexpectable allies.

While it initially appears as yet another obsessive detective chasing criminals from his past, Welcome to the Punch is actually more complex than this. This complexity doesn't, however, intrude on the gun death-heavy action.