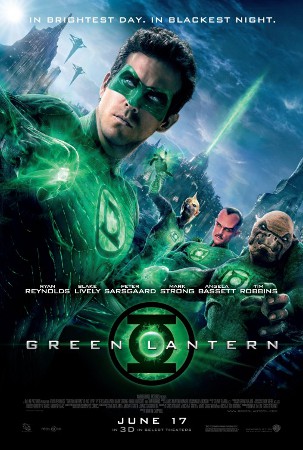 The Green Lanterns are an intergalactic peacekeeping force, whose members are given a ring that "turns thought into reality." The greatest danger to the corps is Parallax (Clancy Brown), who represents fear and the yellow energy. When respected Corps member Abin Sur (Temuera Morrison) is fatally injured, his ring leads him to Earth, and chooses a replacement: a brash test pilot named Hal Jordan (Ryan Reynolds).

Hal is the first human chosen to be a Lantern, which earns him few friends, and he struggles with a lot of personal issues regarding what is considered to be the "fearless" Green Lantern ideal. Contrasting him, a bitter and resentful childhood friend Hector Hammond (Peter Sarsgaard) is infected with a part of Parallax, giving him unstable psychic powers and leading him to give in to his fears. As Parallax sets its sights on Earth, Hal is forced to harness the power of the ring and save his planet.

The film was intended to launch the DC Comics counterpart to the Marvel Cinematic Universe like Iron Man did, but ultimately this was not realized due to the film's poor financial returns. Instead, Warner Bros. decided to retool Man of Steel into the actual launchpad for what would become the DC Extended Universe, ultimately with greater success. Having got off the ground, the DCEU is planned to feature a Continuity Reboot of the Green Lantern series with Green Lantern Corps (starring Hal Jordan, John Stewart and other prominent Green Lanterns), with possible appearances from the characters prior to that. Greg Berlanti and Marc Guggenheim, who wrote the screenplay from this film, would go on to create the tv show Arrow which would be the first series in the Arrowverse. In the 2019-2020 crossover event Crisis on Infinite Earths (2019) footage was used from this film to confirm it takes place on the post-Crisis Earth-12 in the Arrowverse multiverse, which includes the DCEU and other DC live-action properties.

A Licensed Game was made for the PlayStation 3, Xbox 360, Nintendo Wii, Nintendo DS and Nintendo 3DS titled Green Lantern: Rise of the Manhunters.

Your enemy is not gonna play fair.