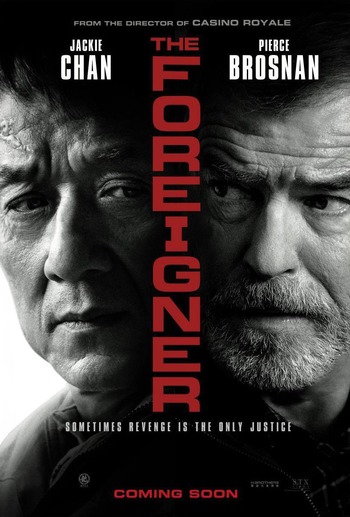 Never push a good man too far.
Quan: Mr Hennessy, please find out the names of the bombers.
Hennesy: I work for the government, not terrorists.
Quan: You used to work for them.
Hennesy: I don't know who the bombers are.
Quan: I don't believe you.
Advertisement:

The Foreigner is an 2017 British-Chinese action thriller movie directed by Martin Campbell starring Jackie Chan in his first film to receive a wide Western release since The Karate Kid (2010). This is based on the novel The Chinaman, written by Stephen Leather, which was written in 1992.

Ngoc Minh Quan (Chan), a Chinese restaurant owner and businessman, lives in London with his daughter (Katie Leung) leading a humble, peaceful life with her. But after she is suddenly killed in a bombing by Irish terrorists, a broken, vengeful Quan goes on the warpath to discover the terrorists' identities and make them pay for their crimes, which brings him into conflict with British government official Liam Hennessy (Pierce Brosnan).

You can find the first trailer here

. Not to be confused with Steven Seagal's 2003 film of the same name or the 1984 stage play also called The Foreigner.

The Foreigner contains examples of: