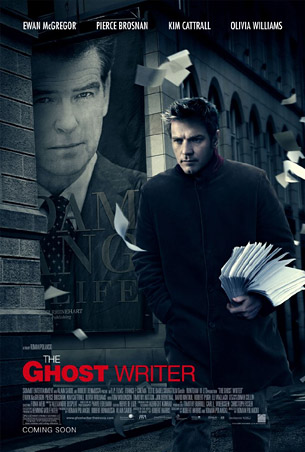 The Ghost Writer, also known in the UK as The Ghost, is a 2010 political thriller based on the novel by Robert Harris, directed by Roman Polański and starring Ewan McGregor, Pierce Brosnan, Olivia Williams, and Kim Cattrall.

An unremarkable and unnamed ghostwriter (McGregor) has landed a lucrative contract to redact the memoirs of Adam Lang (Brosnan), the former British Prime Minister (based on Tony Blair). After dominating British politics for years, Lang has retired to the United States with his wife Ruth (Williams). Soon, Adam Lang gets embroiled in a major scandal with international ramifications that reveals how far he was ready to go in order to nurture the UK's "special relationship" with the USA. But before this controversy has started, before even he has closed the deal with the publisher, the ghostwriter gets unmistakable signs that the turgid draft he is tasked to put into shape inexplicably constitutes highly sensitive material.

Not to be confused with the children's television series Ghostwriter. See this article

on That Other Wiki for an explanation about the word "ghostwriter". Also, not related with the Australian psychological horror novel.