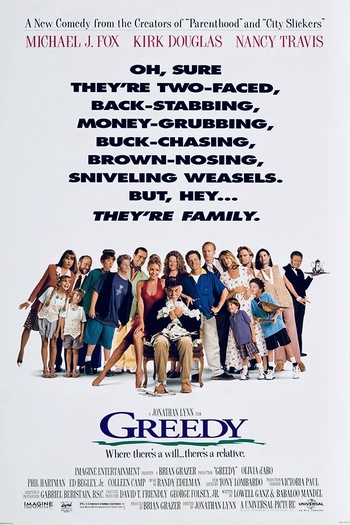 Greedy is a satirical 1994 comedy film directed by Jonathan Lynn, written by Lowell Ganz and Babaloo Mandel, and featuring an Ensemble Cast.

Multi-millionaire scrap metal tycoon Joe McTeague (Kirk Douglas) is a Grumpy Old Man confined to a wheelchair, who's going to leave his fortune to a member of his family. As he has no children of his own, his prospective heirs include his niece Patti (Colleen Camp) and nephews Carl (Ed Begley Jr.), Frank (Phil Hartman), and Glen (Jere Burns); their respective spouses, Ed (Bob Balaban), Nora (Mary Ellen Trainor), Tina (Siobhan Fallon), and Muriel (Joyce Hyser); and their various children.

The greedy, backstabbing, Big, Screwed-Up Family members bicker amongst each other as they try to win Joe over into giving one of them his money, but it doesn't work, so they hire a detective to track down his estranged brother Daniel (Francis X. McCarthy), but Daniel and Joe don't see eye-to-eye, so then there's Daniel's son Danny (Michael J. Fox), the favorite of Joe and a professional bowler with arthritis in one of his hands. When the other relatives tell Danny about Joe and his personal nurse (Olivia d'Abo), whom they believe is a Gold Digger planning to sleep her way into Joe's will, Danny agrees to help them try to talk him out of leaving his fortune to her.