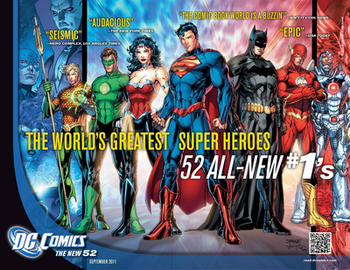 25 years later, they did it again.

2011's "New 52" is DC's second major reboot, stemming from the Flashpoint event that resulted in a Cosmic Retcon, turning what had become a Crapsack World Alternate Timeline into a Close-Enough Timeline. (There were two other previous Post-Crisis Cosmic Retcons — with Zero Hour: Crisis in Time! and Infinite Crisis / 52 — but they were largely cosmetic.) In the wake of The Flash messing with the Timey-Wimey Ball, DC canceled all their ongoings (even Action Comics and Detective Comics) and launched 52 new titles in their place. In this new continuity, superheroes have only emerged publicly in the last five years or so, with many only beginning to show up now. Even so, many major prior storylines are still canon, at least in Broad Strokes. Certain Vertigo Comics and WildStorm characters have also been incorporated into this new continuity.

After the 2015 Crisis Crossover Convergence, DC has announced that they were ending the New 52 branding.

Instead of a cosmic retcon, this new initiative —dubbed DC You— was an update to the publishing slate, removing the "New 52" logo from its books, as well as adding 24 new titles to the surviving 25. note notably adding up to 49 and not 52. DC You only lasted for a year or so, before another big rebrand, DC Rebirth, which actively used the rewinding of some of the more unpopular changes of the New 52 era as a selling point.

As of the conclusion of Doomsday Clock, the New 52 is now a part of the multiverse, as Earth-52. A variation of this universe, called Earth-N52, appeared in the tie-in comic for Crisis on Infinite Earths (2019) where it was destroyed.

The Bat-books picked up more-or-less where they left off, with Bruce Wayne appointing Batmen worldwide (including Batwing, who operated in a fictionalized version of the Democratic Republic of Congo). However Dick Grayson gave up the mantle of being the Batman of Gotham and returned to being Nightwing. Meanwhile, Barbara Gordon had recovered from her paralysis and become Batgirl again – replacing Stephanie Brown, who was apparently erased from continuity along with former Batgirl Cassandra Cainnote both were reintroduced years later with new origin stories. Red Hood was finally shifted into the role of an antihero, albeit at first estranged from the rest of the Batfamily. The books also introduced the Court of Owls, an Ancient Conspiracy that has run Gotham for generations and has ties to Wayne's and Grayson's pasts. Later on, it was revealed that Tim Drake had never been Robin, only Red Robin, and that his parents were still alive and in witness protection.

Demon Knights, Dial H, Threshold, and Legion of Super-Heroes are ending their runs in August 2013. Except for Forever Evil, no new books for September because it was Villains month. Replacements are: