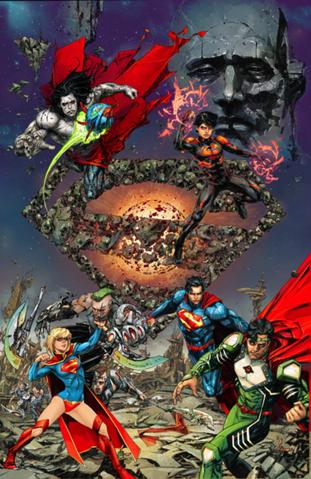 Krypton Returns is the second Superman crossover story arc of the New 52 and the direct sequel to H'el on Earth. Starting in October 2013, the story begins in Action Comics Annual #2 and continues through the Superboy and Supergirl titles, concluding in Superman #25. Before any of these issues were released, Superman #23.3, released during Villains Month, served as a prelude and revealed H'El's origin. Its written by Scott Lobdell, Justin Jordan and Michael Alan Nelson.
Advertisement:

After the events of H'el on Earth, H'El has been sent back in time to the period of Krypton's explosion. Using his knowledge of the future, H'El hopes to save Krypton, but his actions begin to cause great damage to the universe. Superman and his allies travel to the past in order to stop him.