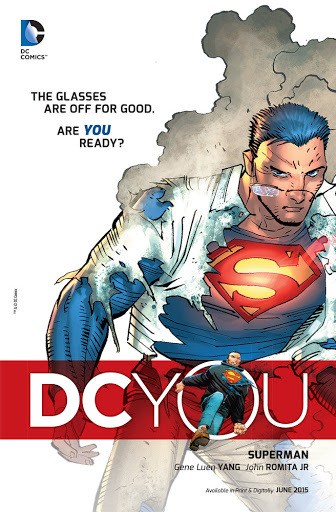 DC You was an comic book initiative launched by DC Comics in 2015, spinning out of Convergence, which saw the end of the New 52 branding. The initiative put an emphasis on "story over continuity", loosening the restrictions of continuity to allow for a diverse range of genres. Many notable characters also underwent status quo changes.

While DC You brought some acclaim to the company with an emphasis on diversity (namely in titles like Midnighter, Omega Men, and Black Canary), overall sales of their books hit new lows, sinking down to what they were before the New 52 launched, making it pathetically short. Because of it, DC Rebirth —a line-wide rebranding— launched in June 2016, revitalizing sales.

Arkham Manor, Aquaman and the Others, Batman and Robin, Batman Eternal, Batwoman, Constantine, Earth 2, Green Lantern Corps, Green Lantern: New Guardians, Infinity Man and the Forever People, Justice League 3000, Justice League Dark, Klarion, Secret Origins, Star-Spangled War Stories, Supergirl, Swamp Thing, Trinity of Sin, and Worlds' Finest were all officially canceled in February 2015, making way for an ambitious slate of new titles to be launched after Convergence. Most notably, this initiative marks the end of the New 52 branding, but will not reboot current continuity. In May 2016, all titles ended and were restarted with #1s save for two (Action and Detective) as part of the new initiative DC Rebirth

Replacing the above titles are:

Two additional titles — Mystik U and Dark Universe (a renamed replacement for Justice League Dark)— were also announced, but ended up delayed and eventually unpublished.

A series of one-shots tying into the Justice League Darkseid War story, each focusing on a different character:

The following series will pick up on threads left by the Convergence event:

In July 2015, DC announced they'd be launching a set of limited series meant to bring some older characters back into the spotlight, with many of them being written by their original creators. Ultimately, only some of them ended up being published as their own titles:

The rest of them (minus a planned Raven series written by Marv Wolfmann) were consolidated into a monthly anthology called Legends of Tomorrow — not to be confused with the television series of the same name.
Advertisement:

DC YOU contain examples of the following tropes: