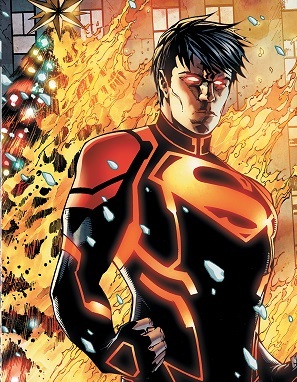 The ongoing series from DC Comics starring Superboy, otherwise known as Kon-El, following the New 52 continuity reboot. The series began in September 2011, originally written by Scott Lobdell and drawn by R. B. Silva.

Kon-El was one of the clearest examples of a character being completely reimagined for the new continuity, with his history and personality completely changed and started over from the beginning. He is a clone created by the villainous organisation N.O.W.H.E.R.E. as a Living Weapon, emerging from his cloning tube in the first issue and being tasked with hunting down and capturing teenage superheroes. However, it soon becomes clear that he is a lot more self-aware and independent-minded than anyone realised – soon he breaks from N.O.W.H.E.R.E. and joins with the Teen Titans, beginning his journey of learning what it means to be a real person and more than just a weapon.

The series underwent a significant Retool following the "Krypton Returns" crossover, with Kon replaced by his progenitor, Jon Lane Kent. The series ended in July 2014 with issue #34, which featured the return of Kon.

Tropes associated with Superboy (vol. 6) include: