Comic Book / Superboy and the Ravers 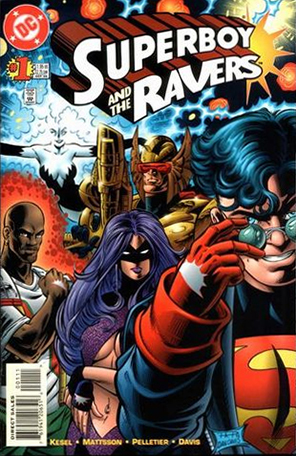 Superboy and the Ravers is a nineteen issue DC Comics series published from 1996 to 1998. It was written by Karl Kesel and Steve Mattsson with artwork by Paul Pelletier, Dan Davis, John Kalisz, Todd Nauck.

Superboy 's friend Sparx (D.C. Force) introduces him to the never ending rave of Event Horizon where he meets Aura (Lindsay Wah), Hero Cruz, and Kaliber. When Lindsay, Hero and D.C. are attacked by a group of extraterrestrial punks called the Red Shift after leaving the rave they encounter Byron Stark who has been holed up for decades in the buried spaceship that killed his family and pregnant girlfriend and left half his body as transparent glowing green ectoplasm. After the fight Byron is invited to join the rave and gets swept along with Superboy and his new acquaintances on adventures across the universe, a road trip through the United States, and frequent visits to Event Horizon while the group acts as intergalactic superheroes usually pulled into situations requiring heroics not entirely by their own will.

Several of the surviving Ravers showed up again as Young Justice allies and in Kon's ongoing Superboy title and a handful of them joined various branches of the Teen Titans.

Superboy and the Ravers provides examples of: