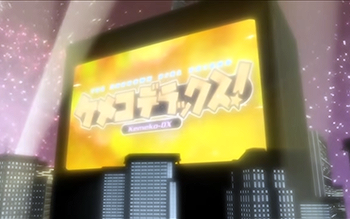 "The picture's crystal clear and everything is magnified
Robert De Niro's mole has got to be ten feet wide
Everybody in the town
Can hear those 90,000 watts of Dolby sound
And I'm mighty proud to say
Now I can watch The Simpsons from thirty blocks away"
— "Weird Al" Yankovic, "Frank's 2000" TV"
Advertisement:

Frank's 2000" TV. Still a relatively uncommon sight, but starting to gain in popularity as larger and larger screens are possible. This is really little more than a giant television, usually on the side of a building. There's one in Times Square in New York, at least one in Tokyo, and often their slightly smaller cousins are present in Elaborate Underground Bases. Jumbotrons are a close, but comparatively tiny, relative.

Often used for advertising in the sort of Dystopian future that has a lot of Corrupt Corporate Executives in it. In a particularly bad one, it could also be used so that Big Brother Is Watching You.

Note that in real life a screen that is too large is counterproductive - while the human field of view is nearly 180 degrees without moving the eye or head, the proportion of this that is comfortable to watch fast moving images on is smaller. It's the same reason that when choosing seats in a cinema people instinctively gravitate towards the middle or back - sitting at the very front is tiring as you constantly have to move your eyes and head to keep whatever action is happening away from the centre of the screen easily visible to you.