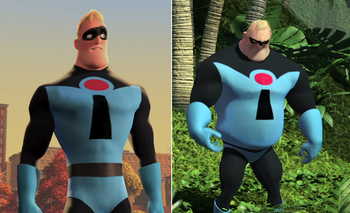 Edna Mode: "My god, you've gotten fat."
Fat and weak, what a disgrace
Guess the champ got too lazy
Ain't gonna fly now, he's just taking up space
Sold his gloves, threw his eggs down the drain
— "Weird Al" Yankovic, "Rye or the Kaiser (Theme from Rocky XIII)"
Advertisement:

The inverse of Formerly Fat, in which a character that used to be trim or athletic ends up overweight or obese.

The reasons for this vary. The fact that they haven't been paying as much attention to their weight could mean apathy. Something huge and life-changing could have happened, resulting in depression. Heartbreak could lead to Drowning My Sorrows and/or Heartbreak and Ice Cream, which could in turn lead to this if it goes on long enough. Parenting is a notorious cause due to the stresses of child-rearing, with mothers getting the double-whammy of natural weight gain during pregnancy. It's also well-known among former military and professional athletes; returning to civilian life causes many to let themselves go over time, especially if their previous lifestyle required them to be big eaters and they kept the appetite but not the daily rigors that called for it.

Of course, there need not be a dramatic reason behind the weight-gain. For many people, metabolism slows as they get older. If they didn't work out or mind their diet before, their favorite jeans may suddenly become a lot tighter than they remember.

Compare I Was Quite a Looker, though the number of years between past and present doesn't have to be as great, and the currently-overweight person isn't necessarily unattractive. Often the Formerly Fit person will be chided by other characters and/or show regret for letting it get this far. In those cases, they may decide to work it off. Alternatively, they could grow into being Fat and Proud, especially if they're healthier and happier now than when they were forced to maintain a svelte image. Expect A Weighty Aesop.

Contrast Acrofatic and Stout Strength, when their weight does not hinder them (or, occasionally, even helps them) in completely outclassing conventionally fitter people.