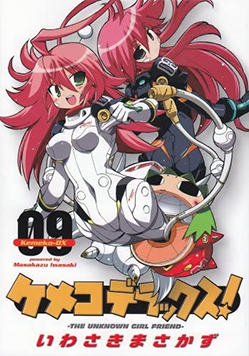 Sanpeita Kobayashi made a Childhood Marriage Promise ten years ago. To this day, he still keeps her photo around in his wallet. His life is about to change. One day, a Super-Deformed Powered Armor calling itself Kemeko blasts into his life and declares Sanpeita to be her husband. He now has to live with Kemeko, who was apparently sent to protect Sanpeita from the Mishima Electric Corporation, a Mega-Corp that is after his power. It doesn't help matters that everyone around Sanpeita is some degree of crazy.

Kemeko Deluxe! is a shonen manga by Masakazu Iwasaki, which was serialized from 2005 to 2011 (starting in Dengeki Comic Gao!, and moving to Dengeki Daioh in 2008 when Gao ceased publication) and compiled in 9 volumes. It was adapted into an anime by Hal Film Maker in 2008. The anime covers the first two and a half volumes of the manga.