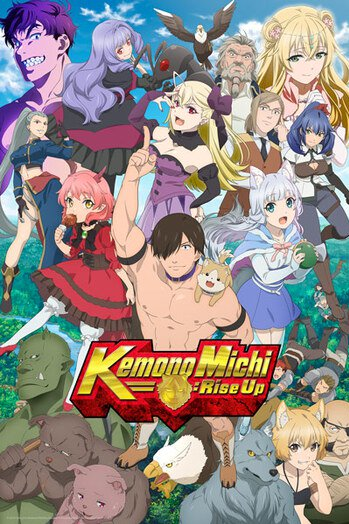 It's a Fight for Animal Rights!
Advertisement:

On the night of his title match, professional wrestler Genzo Shibata, better known as "Animal Mask", gets whisked away to a fantasy world, summoned by Princess Altena Elgard Ratis, who tasks him with defeating demonic beasts. Unfortunately, Altena forgot one crucial detail about Genzo: he is an avid animal lover who dreams of one day opening up a pet shop once he hangs up his wrestling gear for good. Needless to say, he refuses the call.

More specifically, he gives her a German suplex.

After escaping the Princess with his pet dog Hiroyuki, Genzo decides to use his new life to finally pursue his lifelong dream of opening up a pet shop, assisted by entrepreneurial wolf-girl Shigure, omnivorous dragon-girl Hanako, and her vampire lady-in-waiting Carmilla Vanstein, find and tame every last demonic beast, and introduce to his new world the joys of pet ownership.

Kemono Michi (けものみち) is an ongoing 2016 manga series written by Natsume Akatsuki (of Konosuba fame) and illustrated by Mattakumo-suke and Yumeuta. It has been serialized in Monthly Shōnen Ace since November 2016, and also has anime adaptation directed by Kazuya Miura for Studio ENGI, airing in Fall 2019, with an English dub by Funimation under the English title Kemono Michi: Rise Up.