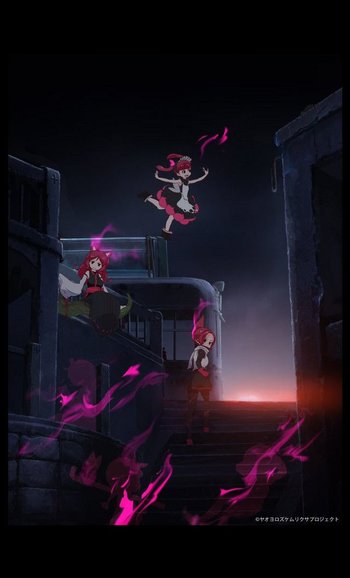 A group of sisters try to live through the hardships of the world they live in while searching for water. Not long after they find a small puddle, one of the sisters gets too reckless and gets killed by a giant red bug. After they secure the water, a mysterious boy with no memories appears from the source they were extracting from. At first suspected to be an enemy, the boy will prove his worth and help the sisters to take down the source of all their troubles, the Red Tree.

Kemurikusa is the name of the 2012 doujin anime, later Winter 2019 anime show created by TATSUKI, who previously directed the Winter 2017 highly successful Kemono Friends anime. Much like its predecessor, it follows the main character through a world that has seen better days, while maintaining moments of calmness and bonding within the cast, with an underlying somber tone that sets a grim tone for the story.

The series is being streamed online through Amazon Prime Video.

Months before its premiere on January 2019, TATSUKI released a few shorts showing a bit of the story's backstory and the underlying tones of it, focusing on what the sisters liked. A week after the anime finished airing, on April 3rd, 2019, and much like with the first season of Kemono Friends, he released an unofficial short titled "Episode 12.1" on Twitter and YouTube.