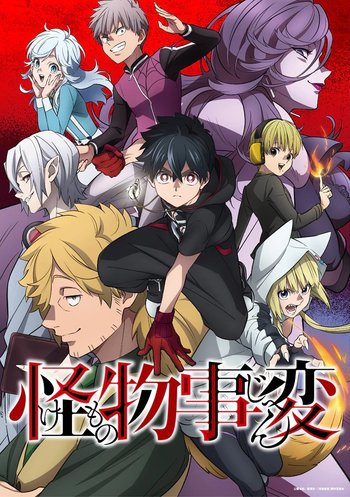 Our story begins when a detective named Kohachi Inugami, a specialist in the occult, is called to a remote Japanese village to solve a pressing case: the local animals are being killed and devoured and their bodies were rotting away within a single day. He checks in at the local inn while investigating, discovering that a quiet boy nicknamed "Dorotabō" was forced to work in the fields instead of being sent to school. Intrigued, Inugami asks for Dorotabō's help specifically, much to the shock of the innkeeper and the local townspeople, who constantly demean the boy and never use his real name, Kabane Kusaka.

It isn't long until it's clear that supernatural forces are at work, and his nickname may not be the only inhuman thing about Dorotabō...

Kemono Jihen (Monster Incident) is a Urban Fantasy Shōnen manga written by Shou Aimoto, who is most famous for writing Hokenshitsu no Shinigami, and began running in Jump SQ, an off-shoot of the legendary Shonen Jump, in 2016. It follows Kabane as he discovers the world of kemono, supernatural creatures akin to the monsters of lore, as well as the war brewing between those determined to uphold the Masquerade and maintain the peace and those who would rather gain the power to lord over humans and kemono alike.

An anime adaptation was announced in late 2019 and began running in January 2021.