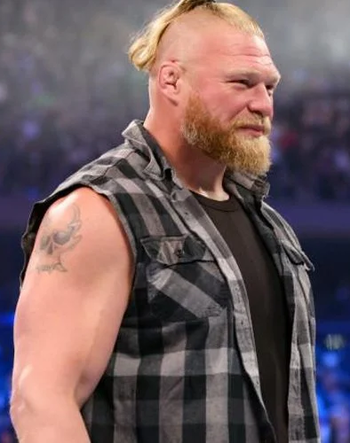 The Alpha Male of Our Species.
"Let's get one thing straight: Brock Lesnar is not here to put smiles on people's faces. Brock Lesnar is here to shock the WWE Universe and put tears in the eyes of children."
— Paul Heyman
Advertisement:

Brock Edward Lesnar (born July 12, 1977) is a professional wrestler and MMA fighter. Lesnar won the NCAA Division I Heavyweight Championship in 2000, before being signed to WWE's developmental promotion Ohio Valley Wrestling later that year, and in 2002 debuted in WWE full-time. After winning the WWE Championship

three times, he suddenly left WWE in 2004 to try out for American Football. He played pre-season for the Minnesota Vikings, but was cut before the regular season began. He then returned to wrestling and went on to win New Japan Pro-Wrestling's IWGP Heavyweight Championship

in 2008 from Randy Couture, later losing it to Cain Velasquez in 2010. He served as a coach on The Ultimate Fighter opposite Junior Dos Santos. However, an ongoing battle with diverticulitis

ended up cutting his MMA career short, and he retired after losing to Alistair Overeem in late 2011. Lesnar returned to the UFC for one night only at UFC 200 in July 2016, defeating Mark Hunt, although the decision was reversed (being declared a no-contest) after Lesnar failed a drug test.

Lesnar returned to the WWE on the April 2, 2012 episode of WWE Raw, when he came out and hit John Cena with the F5. In 2014, Lesnar defeated The Undertaker at WrestleMania XXX, ending 'Taker's previous 21-0 streak at the show. Four months later he decisively beat Cena (for the fourth time) at SummerSlam 2014 to become the WWE World Heavyweight Champion, only dropping it more than half a year later at WrestleMania 31 to Seth Rollins without being pinned.Explanation Rollins cashed in his Money in the Bank contract while Lesnar's match for the title with Roman Reigns was in progress, converting it into a triple threat match, and subsequently pinned Reigns to win the match and the title. Two years later, he would again become a heavyweight champion, defeating Goldberg at WrestleMania 33 to win the WWE Universal Championship and carry it until SummerSlam 2018, where he was defeated by Roman Reigns after being distracted by Braun Strowman. When Reigns was forced to take a hiatus from the ring to undergo leukemia treatment, Lesnar again won the vacant Universal Championship against Strowman at the 2018 Crown Jewel event, making him a two-time WWE Universal Champion, only to end up losing it to Rollins at WrestleMania 35 after being low-blowed. On May 19, 2019, he won the annual men's Money in the Bank ladder match, eventually cashing in the contract at Extreme Rules on July 14, 2019 to become a three-time Universal Champion. Unfortunately, Lesnar's third Universal Title reign lasted less than a month, as Rollins defeated him yet again at SummerSlam 2019 despite the No-Holds-Barred Beatdown he gave to The Architect two weeks earlier.

Lesnar has also managed to leave an impact on pop culture. By their own admission, the creators of Manly Guys Doing Manly Things and Attack on Titan used Lesnar as a model for the physical build of two important characters — Commander Badass and the Armored Titan, respectively. Coincidentally, they both seem to know Brock mostly from his UFC days.

These are the Next Big Tropes:

Example of:
Defeating the Undefeatable