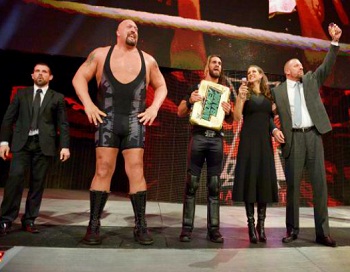 The Authority is a Power Stable in WWE led by WWE COO Triple H and Stephanie McMahon. Their goal is to make life miserable for babyface wrestlers (especially Daniel Bryan, The Big Show, and to a lesser extent, Cody Rhodes and Goldust), supposedly because it's "best for business."

Formed the day after SummerSlam 2013 in which Triple H pedigreed Bryan after Bryan defeated John Cena to win the WWE Championship and allowing Orton to cash in his Money in the Bank briefcase to become the WWE Champion. The apparent members of the group at that point included the three members of The Shield as their enforcers before they broke away. They also attempted to strongarm The Big Show to do their bidding as a result of Show being apparently broke, but Big Show ended up rebelling.

The Authority made life a living nightmare for WWE Superstars who rebelled against them by putting them in handicap matches and even "fired" Rhodes after Rhodes lost to Orton on the September 2, 2013 episode of RAW. That is until WrestleMania 32 where Triple H, who was then WWE World Heavyweight Champion, lost to Roman Reigns, and their reign of terror over WWE ended with Shane McMahon being given authority to run Raw.

Definitely not to be confused with the superhero team The Authority.

These tropes about The Authority are best for business: