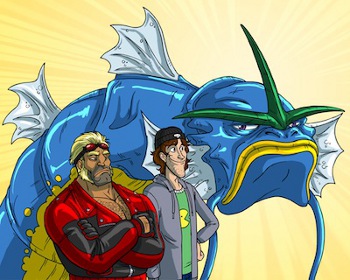 Left to right: Commander Badass, Jared and Mr. Fish.
"Lady, you have no idea how hard it is for guys like Kratos to reintegrate into everyday society."
— Commander Badass
Advertisement:

Created as an entry for a webcomic contest in 2010 for The Escapist, Manly Guys Doing Manly Things (MGDMT) is a comic about a temp agency to help "ludicrously macho guys" find work in the real world when they no longer have work as popular fiction characters. How well they actually integrate has... mixed results.

Sadly, the comic lost out the contest, but was by far a favorite among those paying attention to the contest, making it popular enough for its creator, Coelasquid, to keep it going. The series carried on, on a fairly punctual weekly basis, for years, until Coelasquid went on an indefinite hiatus. A backup can be found here

It can be beheld here

in all its manly glory.