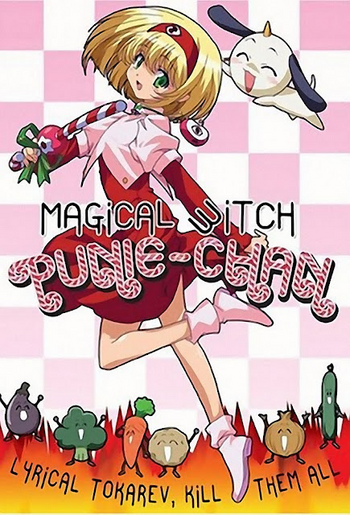 Tanaka Punie is a Princess of Magical Land, and heir to her mother's throne.

However, in order to become Queen, she must spend a year in a normal Japanese High School. Besides the normal high-school troubles that you might expect, she must also deal with assassins who want to make sure her family will no longer control Magical Land, as well as competition from her two little sisters. Hilarity Ensues, but not how you might expect. Because Punie is far, FAR from being your typical Magical Girl.

As the series progresses, more characters are introduced and more and more tropes are shattered.

There's Tetsuko, the Straight Woman who can only watch in horror as Punie and all the "villains" she attracts rip apart every ounce of innocence in the world. There's Anego, the local gang leader and Punie's rival, who really doesn't stand a chance. And then there's Paya-tan, the mascot.

Magical Witch Punie-chan (Dai Mahou Touge, a.k.a. "The Great Magical Gap" in Japanese), is an anime released as an OVA in 2006, based on a manga by Hideki Ohwada. It consists of four double-length episodes.

It has been directed by Tsutomu Mizushima, who previously directed Bludgeoning Angel Dokuro-chan, a better-known series with which it shares quite a few similarities in the comedy department. The show has been released in the west by Media Blasters as Magical Witch Punie-chan, but they sadly omitted the omakes from the original. It was re-released dubbed in June 2011.

As a very dark deconstructive satire of the Magical Girl genre, Dai Mahou Touge constantly pushes the envelope, and then arguably sets the envelope on fire. And then it bakes the ashes into a pie, which will be delicious.