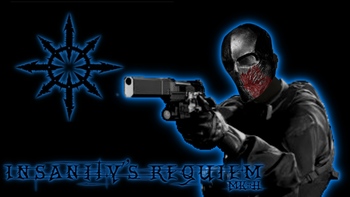 Insanity's Requiem is a Doom mod by ZForum user TiberiumSoul. You play as Ryan Wolfe, a UAC Blackwatch Specialist who happens to be half-demon.

It reportedly got its start as a difficulty mod with the author abandoning it for a time after stopping work on his original build at Mk.1 Version 3.1.0. On June 27th 2015.

Fast forward several months, to November 2nd 2015 and we find that the project was supposedly coming back with an announcement topic "Mark 2, What?" From a look through the forums topic, there was some back and forth banter between TiberiumSoul and ZForum user CarbineDioxide.

On April 20th 2016 Beta 1.0 was released to the public and has been going strong with periodic releases since, with the most recent being Beta 1.8a according to testers on his Discord Server.

As of this day the forums topic still advertises Beta 1.7e as the current available build.

As of this edit the forums topic has been updated, and offers a link to his discord server.