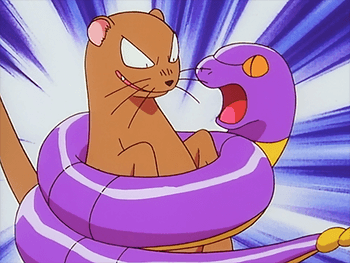 Yungoos, where's your toupee?
"Austin Powers... he's the snake to my mongoose. Or the mongoose to my snake? Either way it's bad. I don't know animals."
— Dr. Evil, Austin Powers: The Spy Who Shagged Me
Advertisement:

It's one of the most famous instances of Animal Jingoism out there. Mongoosesnote or is it mongeese? — weasel-like carnivores belonging to the family Herpestidae — are universally thought of as the mortal enemies of snakes. The snake can be one of many kinds, but it's usually a cobra, especially if the work is set in the Middle East or India. Cobras play a major role in the lore of both of these places, and mongooses were renowned for their ability to hunt and kill them while evading their venomous fangs.

The association of mongooses with cobras specifically was introduced to the world at large in Rikki-Tikki-Tavi, a story from The Jungle Book. Many depictions of the animosity between mongooses and snakes since then have been based on the one in that story, with the mongoose as a heroic defender of the innocent and the snake as a cruel, cunning villain. This dichotomy extends even to fantasy creatures, as the Basilisk and Cockatrice's reputed arch-enemy is the weasel, which may be based on travelers' tales of mongooses killing cobras (people in medieval Europe did not know what a mongoose was, but were familiar with weasels). It is worth noting that in Real Life, mongooses do not actively seek out snakes in preference to other prey—they feed mainly on other small mammals. However, their legendary ability to kill snakes has made them popular as semi-domesticated pets in India and the Middle East.

If a mongoose and a snake are on opposing sides, the mongoose will typically default to the heroic position, since Snakes Are Sinister, however this is not necessary and it is entirely possible for the trope to be neutral in its portrayal. If this is the case, and neither the mongoose nor the snake are depicted as good or evil, then the emphasis is usually on their opposing natures rather than the desire of the mongoose to kill the snake.

Even if a work doesn't actually depict the two animals fighting, the image of the mongoose and the cobra as mortal enemies is such a popular one that it has become a common visual shorthand in visual media for two evenly-matched adversaries.