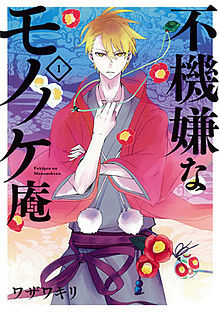 Hanae Ashiya has never believed in demons or spirits — until the day he accidentally steps on a youkai and it attaches itself to him, causing him to spend every day of his first week of high school in the infirmary. Desperate to free himself of the demon, he enlists the help of Haruitsuki Abeno, the morose owner of a tea shop called the Mononokean, to exorcise it. Upon its exorcism, Ashiya is forced into working at the Mononokean to pay off his debt of one million en — the Inderworld's currency.

The Morose Mononokean (Fukigen na Mononokean, literally meaning "Morose Spirit Teahouse") is a supernatural comedy manga by Kiri Wazawa that ran in Square Enix's online web manga magazine, Gangan Online from 2013 to 2021. It can be read in Japanese on Gangan Online

and in English on Crunchyroll

An anime adaptation, announced in February 2016

, and began to air in July. It is available to stream on Crunchyroll

The Morose Mononokean contains examples of: