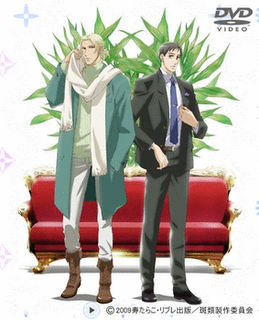 People are starting to act very odd around Norio. This average, normal boy is suddenly getting a lot of unwanted romantic attention and he can’t figure out why! A broken leg and a fall down the stairs into the arms of a handsome stranger set off the beginning of an explanation, and it is one Norio never could have possibly imagined; 30% of humans are not descended from apes but from other animals. These people are called Zoomans and they have a complex social structure. Its members are ranked by rarity and desirability, and it turns out that Norio is a particularly rare breed and his DNA is in much demand! How will he survive in this modern jungle where he’s suddenly the prey?
Advertisement:

Love Pistols is created by Tarako Kotobuki and is known in Japan as Sex Pistols, but due to obvious reasons it was renamed by BLU Manga when it was localized in America (after BLU's closure, the English publication was taken over by SuBLime - both in paperback and digital download). The manga has currently spawned 4 Drama CDs and 2 OVAs.