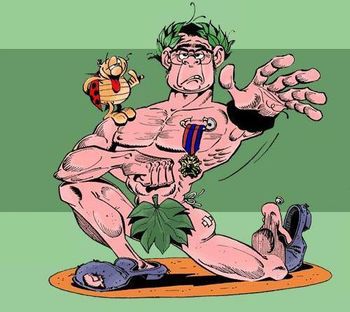 Gotlib by himself.
Advertisement:

Gotlib was the Pen Name for Marcel Gotlieb (14 July 1934 – 4 December 2016). He was a French cartoonist whose Franco-Belgian Comics are popular classics, who started out in cooperation with scenarist René Goscinny (of Asterix fame), and later struck out on his own.

His comics were mostly comedy, dealing with film clichés, complaints about Real Life nuisances, and What If? scenarios... which he tackled with his unique art style and humor.

He is still held in high esteem among French cartoonists. Headed the NSFW Fluide Glacial mature humour and cartoon magazine, which he cofounded, until his death in 2016.

Most of his (SFW) comics are gathered in the Dingodossiers and Rubrique-à-brac series. The NSFW ones are collected in Pervers Pépère and the Rhaâ- series.

Not to be confused with the game company Gottlieb.