Literature / The Priory of the Orange Tree 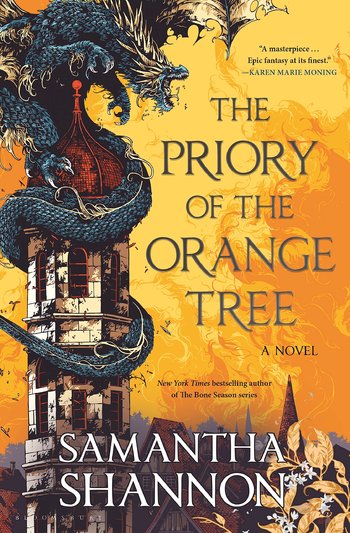 "A world divided. A queendom without an heir. An ancient enemy awakens."
Advertisement:

The world of The Priory of the Orange Tree is divided into two sides: those who worship dragons and those who hate them. In the dragon-worshipping East, Tané is training to be a dragonrider, and Niclays Roos, a master surgeon and alchemist, has been banished to the isolated island of Orisima by Queen Sabran Berethnet IX of Inys. In the West, Queen Sabran is in desperate need of an heir because, the moment her bloodline ends, a terrible dragon will rise again and destroy the world. Eadaz du Zāla-uq Nāra, a mage from the titular Priory, poses as an Ordinary Chamberer to Queen Sabran in order to protect her. Sabran's closest friend, Arteloth Beck, has been sent out of Inys on a mission by the Queen's spy, without the Queen's knowledge or permission.

To prevent the dragons from taking over the world, they must work together despite their differences.