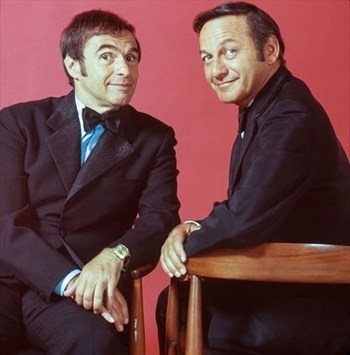 So fair a foul I have not seen!
Ancient knave with heart as black
as coat you wear upon your back,
get thee a pair of glasses, get thee
to an optometrist!
— Rocky in The Shakespearean Baseball Game: A Comedy of Errors, Hits, and Runs
Advertisement:

An early sketch comedy series that went through a number of different incarnations. Hosted by the Canadian comedy team of Johnny Wayne and Frank Shuster. The earliest version was Shuster & Wayne, a radio program they were given as a result of their earlier radio work The Wife Preservers. The next show was The Wayne and Shuster Show created for CBC radio in 1946 after they left the army after the second world war.

There was a weekly television series in the 1950s, but that gave way to the better known appearances on The Ed Sullivan Show (where they appeared 67 times!) and their monthly CBC specials that ran from the early 1960s to the 1980s. Later CBC-aired and syndicated compilations of their skits from the 60s-80s are also marketed under this title, as well as Wayne and Shuster in Black and White, which recirculated episodes from the 1950s and 60s. The secret to their longevity was in part that they agreed early on to keep their relationship strictly professional; they otherwise kept each other out of their personal lives to prevent tensions from work affecting them.

Their comedy has been referred to as literate comedy combined with a liberal amount of slapstick. They often mixed classic references, genre parodies, silly puns and bloodless violence in equal parts (not to mention copious references to Canadian culture, at least on their CBC shows). A famous example being the retelling of William Shakespeare's Julius Caesar as the modern, noir-ish detective story Rinse the Blood off My Toga. They also parodied and spoofed then current events and popular culture such as All in the Royal Family (Hamlet with All in the Family) and Star Schtick and even Macbeth done as an in-period Police Procedural. Most of their shows also included a least a couple of comedic musical numbers.

While some of the sketches might be slightly dated, and the style of comedy can seem a little old fashioned, much of their work is still side-splittingly funny and should be watched when the chance is given. The literate nature of much of their comedy, especially their Shakespeare spoofs as well as other skits such as "The Picture of Dorian Wayne" has also gained admirers.