Manga / My Girlfriend is Shobitch 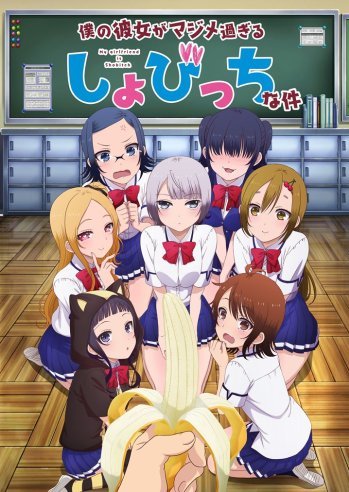 My Girlfriend is Shobitch (Boku no Kanojo ga Majime Sugiru Shojo Bicchi na Ken) is a Japanese manga written and illustrated by Namiru Matsumoto. It was serialized online on Niconico Seiga from July 2015 to September 2019. An anime television series adaptation by Diomedea and Studio Blanc originally aired from October 12 to December 13, 2017.

When high school student Haruka Shinozaki confesses his feelings to the beautiful and aloof class representative, Akiho Kosaka, the last thing he expected was for her to say "yes." Like everything else in her diligent life, Kosaka takes dating quite seriously. In an effort to be a good girlfriend, Kosaka decides to meticulously study (and bluntly suggest) all manner of ways to keep Shinozaki sexually satisfied… in the theoretical sense, that is. This innocently lewd relationship is only just beginning!

My Girlfriend is Shobitch contains examples of: