Manga / My First Girlfriend is a Gal 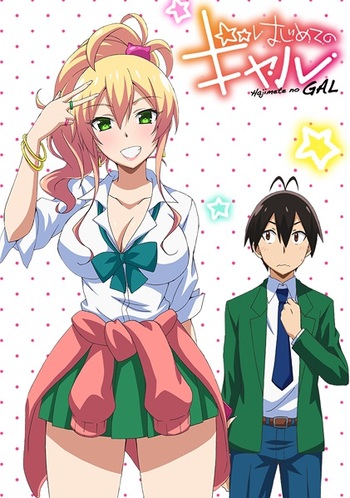 The second year of high school has started, which means boyfriends and girlfriends get to spend the best years of their lives together. Unfortunately, Junichi Hashiba and his friends still find themselves single and hating it. To break the status quo, Junichi's friends have forced him into confessing to the beautiful Yukana Yame. At first, the confession goes south, as Yukana confuses Junichi for a pervert; but surprisingly, she takes a liking to him and agrees to date him. The real challenge, however, is that Junichi has no idea how to lead a relationship. Needless to say, Hilarity Ensues.

My First Girlfriend is a Gal (はじめてのギャル Hajimete no Gal) is an ongoing manga series by Meguru Ueno, premiering on November 2015; so far, it has already spawned 4 volumes. An Animated Adaptation by Production Reed premiered in July 12, 2017, for the Summer 2017 Anime season and can be legally viewed subbed on Crunchyroll here

Also in need of some wiki love.

My First Girlfriend is a Gal contains examples of: