Anime / The Night Is Short, Walk On Girl 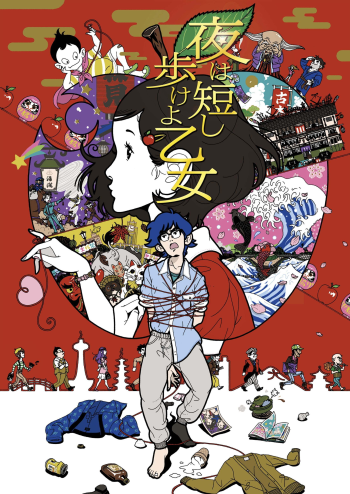 You can't trust people you meet at night.
"Those without Talent should use Effort! / Effort is Talent!"
Advertisement:

A university student (Otome) decides to break away from a wedding reception after-party to go on a Kyoto nightlife adventure all her own filled with urban legend cocktails, possible tengus, and lovely coincidences.

Her smitten upperclassman (Senpai), who had planned to confess his feelings to her at said after-party, pursues the black-haired girl into the night on a farce plagued with criminal thugs, treacherous gods, and harebrained schemes crashing into one another.

Are all her fortunes fated? Are all his calamities coincidental?

A ribald and romantic evening awaits them both.

The Night Is Short, Walk On Girl is an anime film directed by Masaaki Yuasa and released in 2017. It's based on a novel by Tomihiko Morimi, author of The Tatami Galaxy (which Yuasa also directed an anime adaptation for). The film is meant to be a Spiritual Successor to The Tatami Galaxy, though while both works share the same university setting and some of the same characters, their plotlines are largely unrelated. The novel was given an official translation by Yen Press and released in 2019. In January 2021 the film was streamed on HBO Max with an English dub.