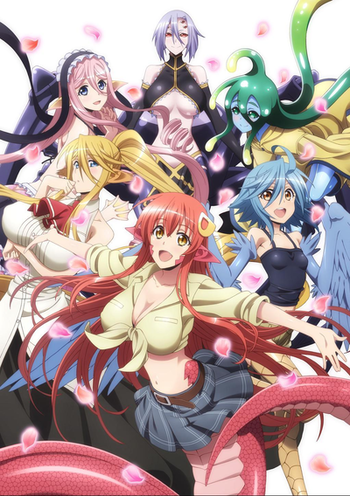 The protagonist isn't in the picture, but we all know you're just here for the monster girls anyway. note Clockwise from top: Rachnera, Suu, Papi, Miia, Centorea, and Mero.
Advertisement:

Monster Musume (known in Japan as Monster Musume no Iru Nichijō, meaning "Everyday Life with Monster Girls") is a manga written by Pixiv artist Takemaru "Okayado" Inui about Kimihito Kurusu and the monster girls he is hosting, a lamia named Miia, a harpy named Papi, a centaur named Centorea (a.k.a. Cerea), a slime girl named Suu, a mermaid named Meroune (a.k.a. Mero), an arachne named Rachnera, and a dullahan named Lala. And this group's only getting bigger.

For Okayado's other works with monster girls, see Deadline Summoner and 12 Beast.

A frequent gag in the early part of the series.

Example of:
Giving Up the Ghost

A frequent gag in the early part of the series.