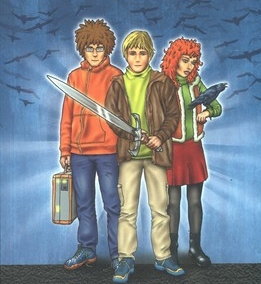 From left to right: Net, Felix and Nika. In Net's suitcase, Manfred.
Advertisement:

It's the beginning of a new school year and, for Felix Polon, also his first day at a new school - the first class of Gymnasium. Looking for his class, he meets a gang of bullies and is robbed for his lunch money. Just after that meeting, he stumbles upon Net and Nika, two classmates, who were robbed the same way. Together, they decide to solve the problem.

Oh, should I mention that Net has a pet AI program called Manfred and is a Playful Hacker? Or that Felix is a Gadgeteer Genius and his father works on top secret government projects? That Nika is hiding that she's an orphan and has Psychic Powers? That the school is haunted? That the gang of so-called Invisible People starts raiding banks and the trio just must find out who are they? Or maybe that magic, advanced cybernetics and time travel are all very real?

The first book was published in 2004 and the series is still ongoing. It is extremely popular in Poland and has won a few national literature prizes. The second book, "Felix, Net and Nika and the Theoretically Possible Catastrophe", was made into a movie, but it did not do well and no others are currently planned.