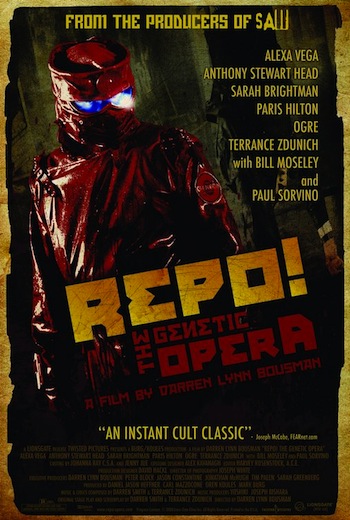 "Your designer heart still beats with common blood.
And what if you could have genetic perfection?
Would you change who you are, if you could?"
— Graverobber

Repo! The Genetic Opera is a 2008 rock opera/cult film. It's written and composed by Terrance Zdunich and Darren Smith, and directed by Darren Lynn Bousman (of Saw II, III and IV fame). The film is based on their 2002 play of the same name. It's a gory, dystopian and ultimately very moving Black Comedy that never takes itself too seriously. Widely known and loved for its WTH, Casting Agency? (see below) and its lush soundtrack, the film has become a modern cult classic. It's also an actual opera: nearly every line of dialogue is sung, and the story is one continuous musical number.

In the not too distant future, an epidemic of organ failures devastates the planet. Panic erupts and scientists feverishly make plans for a massive organ harvest. Out of the tragedy, GeneCo, a multi-billion dollar biotech company, emerges. GeneCo provides organ transplantation for a profit. In addition to financing options, GeneCo reserves the right to implement default remedies, including repossession. For those who can't keep up with their organ payments, collection is the responsibility of organ repo men: skilled assassins contracted by GeneCo, ordered to recover GeneCo's property by any means necessary.

At the heart of the story is Shilo Wallace, a 17-year-old girl with a rare blood disease. Shilo has been kept locked up and protected in her house, where she's guarded from the outside world by her father, Nathan Wallace. While Shilo struggles with her wish to leave the house and experience the outside world, Nathan struggles with his secret job as a Repo Man, and more specifically, his next target, a woman named Blind Mag. Blind Mag, an opera singer bound by contract to GeneCo, was a friend of Nathan's now-deceased wife, and is Shilo's godmother.

The Largo family consists of GeneCo president Rotti Largo, his daughter Amber Sweet, and his two sons Luigi and Pavi. Rotti is dying, and the three siblings bicker and fight about who is to take the role as head of GeneCo. But, disappointed with his own children, Rotti takes an interest in Shilo...

Repo! The Genetic Opera's soundtrack, overseen by producer and X Japan drummer Yoshiki Hayashi, became available on September 30th, 2008, and the film was given a limited release of ten theatres by Lionsgate Films on November 7, 2008. Theatres showing it sold out consistently, and between showings at film festivals and clips and music released online, Repo! has developed a cult following, with some calling it the The Rocky Horror Picture Show of the new millennium. Fans from several countries have been petitioning Lionsgate for a wider release.

"Won" one award at the Razzies in 2009 — basically, for featuring Paris Hilton.

You can find the official site at http://www.repo-opera.com

Brought to you by the WTH, Casting Agency?, it stars:

The Graverobber gives a closing reprise of "Zydrate Anatomy" in the Epilogue.

The Graverobber gives a closing reprise of "Zydrate Anatomy" in the Epilogue.