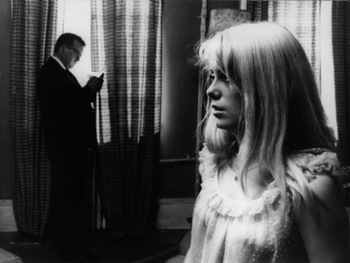 Repulsion is a 1965 Psychological Horror film directed by Roman Polański, based on a scenario he wrote with Gérard Brach. It was Polanski's first English-language film, and was filmed in Britain, as such being his second film made outside of Poland. It's also the first film in his so-called "Apartment Trilogy" (followed by Rosemary's Baby and The Tenant).

Catherine Deneuve stars as Carol, a young Belgian manicurist who lives in London with her sister Helen. Carol seems generally nervous and fearful, particularly of men. When Helen decides to go on a holiday to Italy with her married boyfriend, Carol is left home alone for a few days. It doesn't turn out to be a very pleasant experience. Cooped up alone in the apartment, Carol's already unstable mind begins to crack.