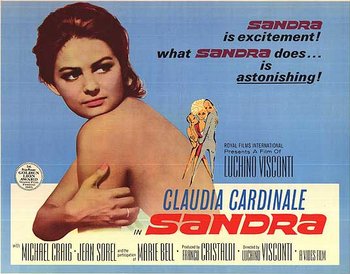 The film known as Sandra was released in its native Italy with the title Vaghe stelle dell'Orsa, in the UK as Of These Thousand Pleasures, and in the US as Sandra (Of a Thousand Delights). It was released in 1965, directed by Luchino Visconti and starring Claudia Cardinale, Jean Sorel, and Michael Craig.

Sandra is based on the Greek play Electra, retold in modern times, when Sandra returns to Italy and has an affair with her brother. Her poor husband seems to know about it, but is more concerned about Sandra's wellbeing regarding the real reason she went home: the annual funeral service for her father who was killed in the Holocaust. This stirs up some more bad family memories, and Sandra with her brother try to bring misery to their mother and stepfather because of their betrayal.