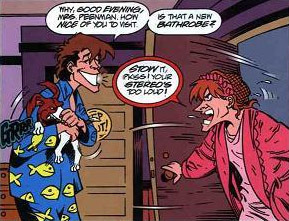 The landlord that hates tenants, and he especially hates the hero, whom he considers a no-good scum of the earth.

Similarly to Nosy Neighbor, this character is always on the lookout to catch the hero doing something against the house rules.

Pretty much anything below being a model tenant will earn the landlord's scorn and an infuriated visit to the offending tenant's apartment: making a noise, coming home too late, bringing another person home, etc.

A common trope is that the tenant is late with the house-rent, and has to argue at length with the landlord to be allowed a few days' respite. There are far more female than male examples of this type of character found in fiction.