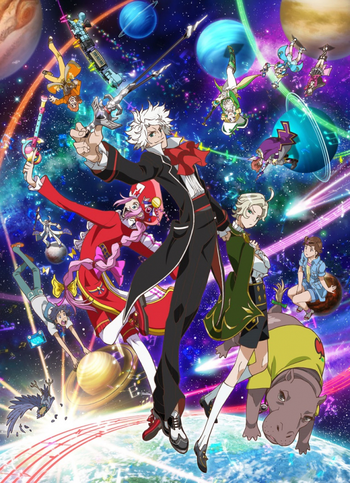 Classicaloidnote (sometimes ClassicaLoid, but that would stuff with the CamelCase) is a Fall 2016 Anime original series produced by Sunrise in collaboration with NHK. Its first season is directed by Yoichi Fujita (fairly fresh off Osomatsu-san) and its second season is directed by Kei Umabiki.

The series premiered on October 8, 2016 as an Edutainment Show, and the original season lasted for 25 episodes. Sentai Filmworks acquired the license for the anime series in North America and simulcasted the series on Hulu, Anime Network and Crunchyroll, with plans to release it on home video. The series was simulcast on AnimeLab in Australia and New Zealand. Its official website is here

It's been described as "[doing] for composers what

Bungou Stray Dogs does for famous authors". If you don't know what that means, don't worry. Our protagonist Kanae Otowa and her childhood friend Sousuke Kagura didn't either.

Basically, Kanae's grandma's old mansion is suddenly invaded by two people claiming to be friends of her dad's - Beethoven and Mozart (call 'em "Beethes" and "Motes", because that's what they call themselves). Sousuke has his stuff stashed in boxes in the mansion, so he meets them too. Just when the house is about to be demolished, Beethoven flips out over some failed gyoza and starts to play music, causing the environment around him to act weirdly - mecha appear, paintings come to life and the pet shoebill waltzes along with everyone! It would not suffice to say that Kanae's and Sousuke's lives are never to be the same again...

At the end of the 25th episode, a second season announcement was revealed for October 2017.