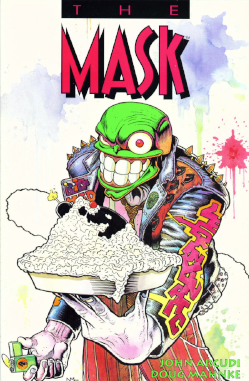 "Big Head" is not as harmless as you remember him.
"I must share these powers with mankind, use them to protect and serve others in need.
But first . . ."
Advertisement:

The Mask is a comic book series best known as the inspiration for that film where Jim Carrey was even more of a live-action cartoon character than usual. Unlike the movie, the comic book is not harmless slapstick, fitting much better in the comedy horror genre.

The story of the comics begins when Stanley Ipkiss, a seemingly nice guy with repressed violent thoughts, buys a green mask (really a semi-living artifact stolen from a tribe in Africa) for his girlfriend, Kathy. Putting the Mask on that night and suddenly changing into a green-headed being with near-infinite powers, Stanley spends the next several months killing anyone he dislikes and becoming increasingly militant and deranged, until a final showdown with police and his girlfriend leaves him dead. The Mask ends up in the hands of policeman Lt. Mitch Kellaway, who becomes the next "Big Head", carrying out similar murders against anyone he dislikes, until he finally realizes what's happening. The stories over the years follow the Mask itself as it goes from owner to owner, usually pursued by Kellaway as he is one of very few who knows the truth behind Big Head's character.

The Mask series is composed of:

Adaptations to other Media

The comics had the following tropes: