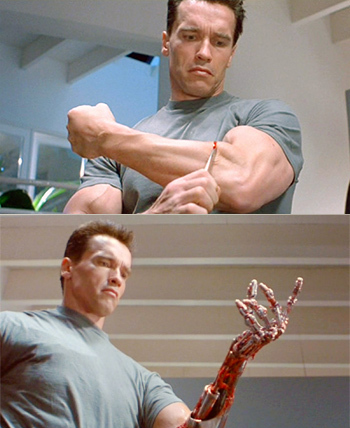 "Now, listen to me very carefully..."
"'Except a corn of wheat fall into the ground and die, it abideth alone.' Wheat, eh? There's enough of it, we can afford to waste as much as we want. Like my head, you see!"
— Albedo, Xenosaga
Advertisement:

Immortality isn't exactly a superpower you can easily prove to the skeptic. Sure, you can say that you're Really 700 Years Old, but who's to say that they'll believe you? And, while you may have that Healing Factor, you need to be injured for that to work. It's not like you can have your arm sliced open on demand just to prove that you—

Wait a sec, you can.

Self-Mutilation Demonstration is the favorite method of Immortals for proving to others their powers. The method is simple: grab a sharp object, slash open your arm (or any other body part), and let your Healing Factor kick in and amaze your guest. In other words, you take Good Thing You Can Heal to its logical extreme, deliberately injuring yourself for the sole purpose of proving you have a Healing Factor. Let's hope you also have the superpower not to feel pain.

Sometimes, the empowered individual will ask someone to just Hit Me, Dammit! This is either a stylistic variant of the same thing, or a character is using to mock Mooks by revealing that this is one thing they have in common with Superman, particularly to justify hitting them back to much greater effect.

Not to be confused with Self-Harm.

Compare Macho Masochism, which is more about harming yourself just to demonstrate how tough you are, without the regeneration powers to back it up. An immortal being might pull off Finger Extinguisher. Contrast Impostor Exposing Test, which may use a similar action to prove that the character isn't anything special. See also Immortal Life Is Cheap, which can occasionally be used by other characters to nonchalantly display another's immortality by hurting them severely.