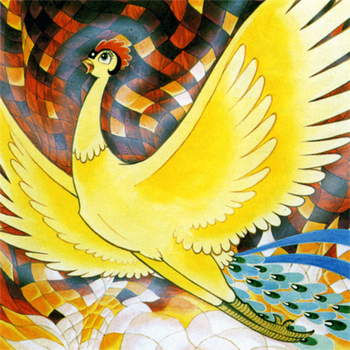 Phoenix (火の鳥) is a manga series by Osamu Tezuka that ran from 1954 to 1988, and is considered by the man himself to be his greatest work.

The series is focused on the Phoenix, a cosmic entity that looks like a peacock and whose blood grants immortality towards whoever drinks it.

The volumes take place either far in The Future or in Feudal Japan. As the series progress, the timelines grow closer. Typically, the story contains much more humor in the feudal Japan stories while the science-fiction stories are more dramatic.

The Viz edition has edited the following volumes:

There have been two OVAs, two animated movies, a live-action movie, and a TV series.

Not to be confused with Phoenix Wright, the French band Phoenix, the (unrelated to each other) coin-op video games Phoenix or Space Firebirds, the Australian police mini-series, the Phoenix air-to-air missile, or Phoenix, Arizona.

See The Phoenix for the mythological creature Phoenix.