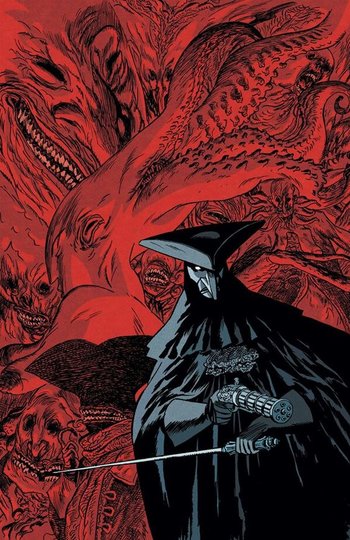 "Let all deeds be confessed! Let all sins be unmasked..."
Advertisement:

Hell has come to the city of Venisalle, and damned souls walk among the living hidden in plain sight through the bodies of those they possess. However, despite all their infernal strength they live in fear of The Marquis, the one man who has the power to banish them back to hell. However, the mantle of Marquis weighs heavily upon the man who holds it, and he has far more enemies than the damned. The Ministry, the Church that rules Venisalle with an iron fist, hunts the Marquis to punish him as a heretic and murderer.

The Marquis is the brainchild of Guy Davis, who also does all of the comic's writing and illustration. The plot focuses on Vol de Galle, a seasoned military veteran and Ministerial Inquisitor who is granted the mantle of Marquis, and with it the ability to see the damned souls possessing the people of Venisalle, after a Crisis of Faith. Strikingly illustrated in black and white and compellingly written, The Marquis delves into questions of sin, guilt, punishment, and redemption within the bleak, gothic city of Venisalle.

Tropes relating to The Marquis