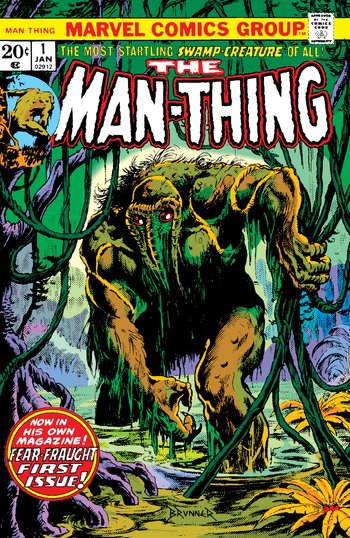 Whatever knows fear burns at the touch of... the Man-Thing!
Advertisement:

Man-Thing is a Swamp Monster from Marvel Comics. He first appeared in "Savage Tales" #1 (May, 1971). The character was co-created by author Roy Thomas and his editor Stan Lee. His debut story was scripted by Gerry Conway and drawn by Gray Morrow. Man-Thing is not to be confused with DC's Swamp Thing, which premiered within a month of Man-Thing. The two characters have many parallels, including their backstories (both partially written by Len Wein), swampy homes, and being re-imagined by notable comic writers.

Man-Thing is a biochemistry professor known as Dr. Theodore Sallis, who was working to try and recreate the lost supersoldier serum of Captain America and would end up doing so albeit Gone Horribly Wrong with Project Gladiator.

Savage Tales was a one-shot publication, though it would be revived as a regular series in 1973. In the meantime Man-Thing gained a regular series in the horror anthology 'Adventure Into Fear'. He became an unlikely hit for writer Steve Gerber, who pushed genre boundaries with the character, providing inspiration for later writers like Neil Gaiman.

Gerber's Retool of the character helped the Man-Thing get his own series, prefiguring Alan Moore's similar reimagining of Swamp Thing; but while Moore's experimentation with the medium garnered him praise and notoriety, Gerber struggled throughout his career with censorship and creator's rights. Gerber introduced Howard the Duck in the pages of Man-Thing, and was soon fighting Marvel over creative control and ownership of the character, costing Gerber his job and leading to a legal case resulting in his bankruptcy.

Unlike Swamp Thing, Man-Thing was a mindless creature living mostly by instinct, hardly aware of his former life. An empathic creature, he often came to the aid of the weak and confronted those who expressed strong negative emotions, since, due to latent psychic empathy, strong negative emotions caused him great pain. Man-Thing has a particular loathing for fear, which comes up often throughout the series, since it is the emotion a giant Swamp Monster is most likely to elicit. The fact that reacting to that fear makes him secrete a deadly potent corrosive is good enough to scare knowledgeable people as well. Writing stories around a mindless, unchanging character proved difficult, but Gerber showed remarkable variance in the types of stories and characters he was able to fit into this rather limited concept. As usual, he tried to bring a sense of realism and psychological depth to the series, and fans responded.

Man-Thing became a member (of sorts) of the Thunderbolts, Marvel's team of redemptive villains, during Jeff Parker's run. Initially intended to be just the team's transportation, thanks to Hank Pym hacking into the Nexus of All Realities, he became one of the team's strongest and most unpredictable members. Eventually, he underwent a Re-Power, giving him a mind of his own and the ability to speak and be understood by anyone he spoke to. When that version of the Thunderbolts came to an end, Man-Thing returned to his swamp.

In 2007, a TV movie was released based loosely upon Gerber's plot about a thoughtless developer trying to drain Man-Thing's swamp. Outside of the authors it inspired, the series is best remembered for its larger collections, infamously titled 'Giant Size Man-Thing'. In 2021, as the 50th anniversary of Man-Thing's creation, there was a special 3-part Curse of the Man-Thing event which ran through the Avengers, Spider-Man and the X-Men. In 2022, the character is set to make his debut in the Marvel Cinematic Universe with the Halloween Special Werewolf By Night.